The spring weather has many people asking, what are my options for treating house ants?

Controlling ants can be challenging and often frustrating to the homeowner but understanding how pest treatment can defeat an ant colony can help make the process smoother.

Eastern pest control technicians will apply insecticide around the home to help reduce the risk of ant populations entering .  The technicians will seek out all potential entry ways including crawl space doors, vents, utility openings and the space around siding as well as any cracks in bricks or foundation.

The treatment creates  a protective barrier that helps keep your home ant-free on the inside and out! 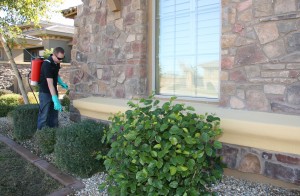 After a long, cold winter people aren’t the only ones who are ready for Spring! Termite swarmers typically emerge from their larger colonies between the months of March and June.

After a termite colony reaches a certain size, members of the colonies branch out to expand. The warmer weather and wet environments of spring lures the termites away from the group and encourages them to reproduce. The result is what we call swarmers, winged termites who fly out to seek a mate, fall onto the soil, shed their wings, then attempt to start a brand new colony in the conducive spring weather.

While most new colonies do not take, swarmers do indicate that an active termite colony is close by. If the spring weather brings swarmers to your home, call Eastern Termite for an assessment. As a termite inspector in NJ I look for moisture problems that can set up conditions that  might make a termite infestation likely.

In Princeton, NJ I found this home that had a serious problem of mold forming. We were hired to come in and seal off the crawl space with a six mil polyethelyne vapor barrier. We sealed it against the foundation wall and installed rigid foam insulation around the perimeter.

This provided complete coverage against moisture. On a recent  termite inspection in Cherry Hill NJ I found major termite damage to the flooring. The owner had tripped when walking over the damaged area.

Upon my arrival the damage continued to the basement. I found live termites in the box beam.

If you see termites or suspect them don’t wait. The repairs can be very expensive. Sometimes growing into the thousands of dollars.

Call Eastern Termite at 800-229-3472 or visit us at  www.easterntermitecontrol.com On a recent inspection of an attic from a customer complaining about carpenter ants I discovered this unique solution to a roof leak. However, it did not keep the Carpenter ants from nesting in the soffits.

The carpenter ants were foraging all over the home. When we looked closer at the area where the leak was we discovered that there was damage due to moisture at the decking and eves due to a leak at the gutters.

When we opened the area a large carpenter ant colony was discovered. We treated the area, made the repairs and put the customer under a warranty.

Most folks  do not realize that the winter time and cold weather bring rats and mice into the home seeking food and warmt. Entry points include a garage door that has a gap or a small hole at the side of your home that allows them to enter.

Rodents can contaminate food, put droppings in all areas of cabinets, silverware and stored products. It is important to get your home rodent proofed for the winter. Especially if you know that you experienced this problem in the past.

Eastern has been taking care of such problems for over 25 years. Call us at 800-229-3472 or visit us on the web at  www.easterntermitecontrol.com Termites almost always enter through a dirt filled porch or attached slab. The front entry serves as a great entry point for the termites to enter the home. The dirt fill comes right up to the sill plate and provides access to your framing members.

Before selling your home it is a good idea to have a termite and home inspection prior to listing in order to fix what is needed before the home goes on the market.

Carpenter ants love moisture. And they love moist wood. A leak discovered under the toilet in a Hamilton NJ home by Rick Pettit an Eastern Pest Control inspector determined that the wax seal inside the toilet rim deteriorated and allowed water to leak into the adjacent sub flooring and wall board area.

The area was excavated, dried and treated with a crack and crevice liquid application. There was a substantial colony living in the wall. Carpenter ants can do substantial damage to framing members with the help of a water source that is leaking.

If you suspect carpenter ants call: 800-229-3472  or visit our web site at: www.easterntermitecontrol.com Here is a picture of termite workers in the colony. Depending on the size of the colony termites can damage sills, studs, all types of framing materials. The repairs can be small if caught or very expensive if the home is left untreated.

If you think you have termites call us for a free inspection.

Eastern Termite and Pest Control.  Treatments for all NJ.  Visit us on the web at www.easterntermitecontrol.com   800-229-3472